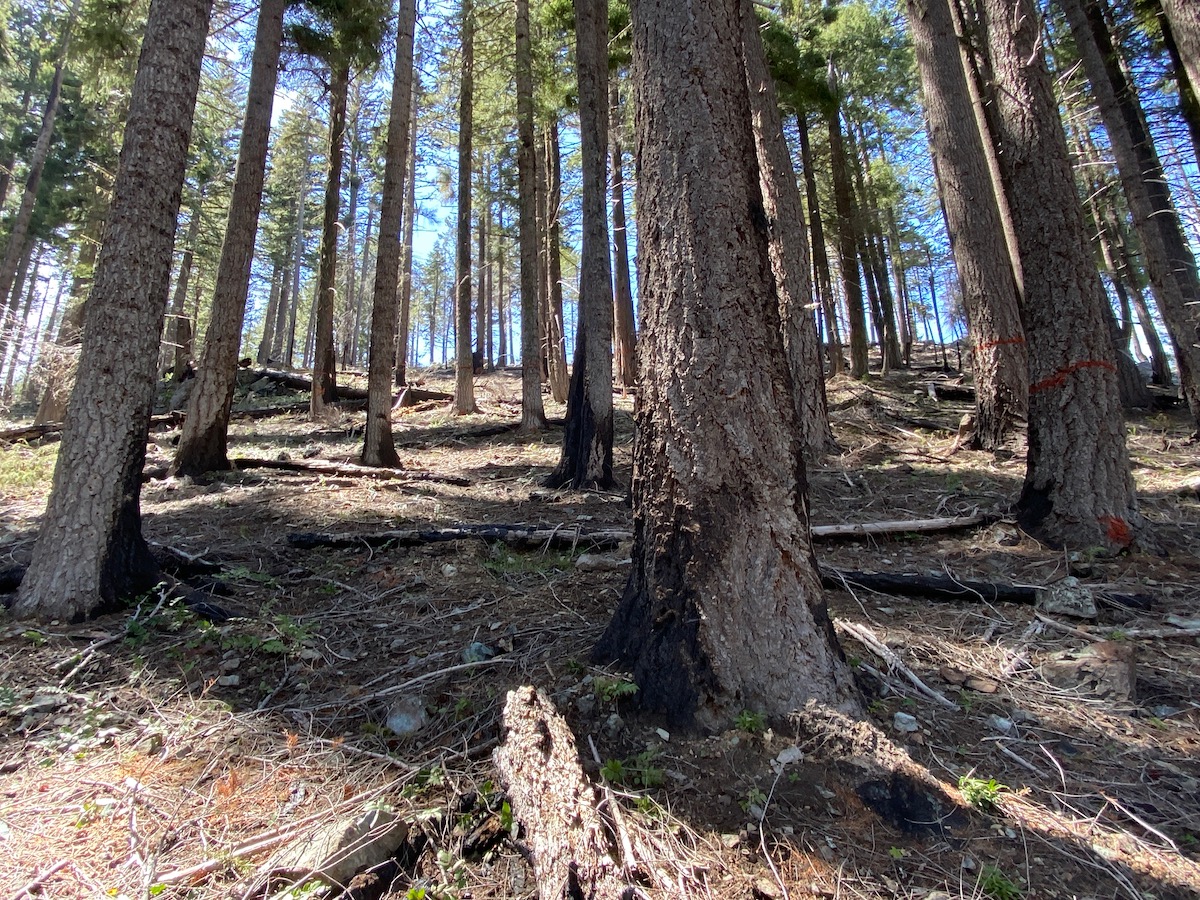 At our recent Provolt Rally, a sign was displayed by a particularly astute local resident declaring the IVM, Intentionally Very Misleading — we could not agree more!

The Applegate Siskiyou Alliance has been tracking and actively opposing the IVM Project since its initial proposal in 2019, and now that the IVM has been approved, the BLM has proposed to begin implementation of the IVM Project in the mountains between Williams and Murphy, Oregon in the Applegate River watershed.

This first project, called the Late Mungers Vegetation Management Project, includes the Late Mungers and Penn Butte Timber Sales. Located in a Late Successional Reserve (LSR) forest designated to protect and develop old forest habitat for the northern spotted owl and other forest dwelling species, these timber sales extend across the Mungers Creek and Powell Creek watersheds above the Williams Valley, across numerous tributaries of the Applegate River, including Murphy Creek, and small portions of the Deer Creek watershed above Selma. Together the timber sales would log 8 million board feet of timber on 800 acres of LSR forest.

We disagree with the following BLM claims for the Late Mungers and Penn Butte Timber Sales:

1. The treatments proposed in the Late Mungers and Penn Butte Timber Sales are necessary, beneficial or are intended to increase fire resilience;

2. The logging treatments proposed will actually increase fire resilience on the stand or landscape level;

3. The logging treatments proposed are actually targeting “overly dense,” forest stands that are “departed” from the range of historic variability; and

For over a month, we have been out monitoring timber sale units throughout both the Penn Butte and Late Mungers Timber Sales. During that time we have found many examples of fire resilient, mature, late successional or old-growth forests proposed for logging; however, unit 26-1A is among the most egregious examples.

Unit 26-1A contains mature, montane fir forest located at roughly 5000′ elevation on the eastern face of Morgan’s Buckhorn and at the headwaters of Powell Creek. The forest in unit 26-1A burned at low severity in the 2018 Spencer Creek Fire, a complex of three small fires that burned approximately 200 acres in the mountains between Murphy, Williams, and Selma.

Ironically, despite the extremely positive fire effects sustained during the 2018 Spencer Creek Fire, the agency has decided that the fire did not kill enough trees in this stand or create the arbitrary stand conditions that BLM claims are most beneficial. The agency is now proposing to log off many of the large, fire resistant trees in unit 26-1A that survived the 2018 Spencer Creek Fire.

Utilizing a so-called “Ecosystem Resilience-open” prescription, the agency has proposed logging, large, fire resistant trees over 30″ diameter and reducing canopy cover to as low as 30% in this stand. This would require removing more than half of the stand’s living trees, and rather than restoring habitat conditions, these treatments would replace functional closed canopy forests with a mere scattering of open grown trees. The logging proposed would eliminate protective cover important for wildlife species, including the northern spotted owl, degrade canopy conditions, eliminate significant habitat complexity and contribute to microclimate alterations that will dry out forest stands, increase temperatures, and regenerate highly flammable young trees and shrubs where fire resistant forest once stood.

Unit 26-1A is “leave” tree or “retention” tree marked, meaning only those trees marked with red paint will be retained if the Penn Butte Timber Sale is implemented and old forest logging occurs. The proposed logging would degrade this currently intact, beautifully fire-adapted forest and undermine the benefits of the Spencer Creek Fire by removing fire resistant trees and damaging the natural post-fire rejuvenation and new cohort of young conifer seedlings sprouting up after the fire. The logging will also impact sensitive fire-affected soils and spread noxious weeds in currently intact fire-adapted, native plant communities.

The logging treatments proposed in unit 26-1A of the Penn Butte Timber Sale have no credible biological justification, just clear economic motivations. Despite the BLM’s rhetoric regarding “forest restoration” and “forest resilience,” the Penn Butte and Late Mungers Timber Sales are the latest and perhaps most brazen examples of industrial, old forest timber sales masquerading as restoration projects on public lands in southwestern Oregon.

You can find more information on this project on recent Applegate Siskiyou Alliance blog posts. The public comment period ends on June 28.

Donate to ASA and support our work!