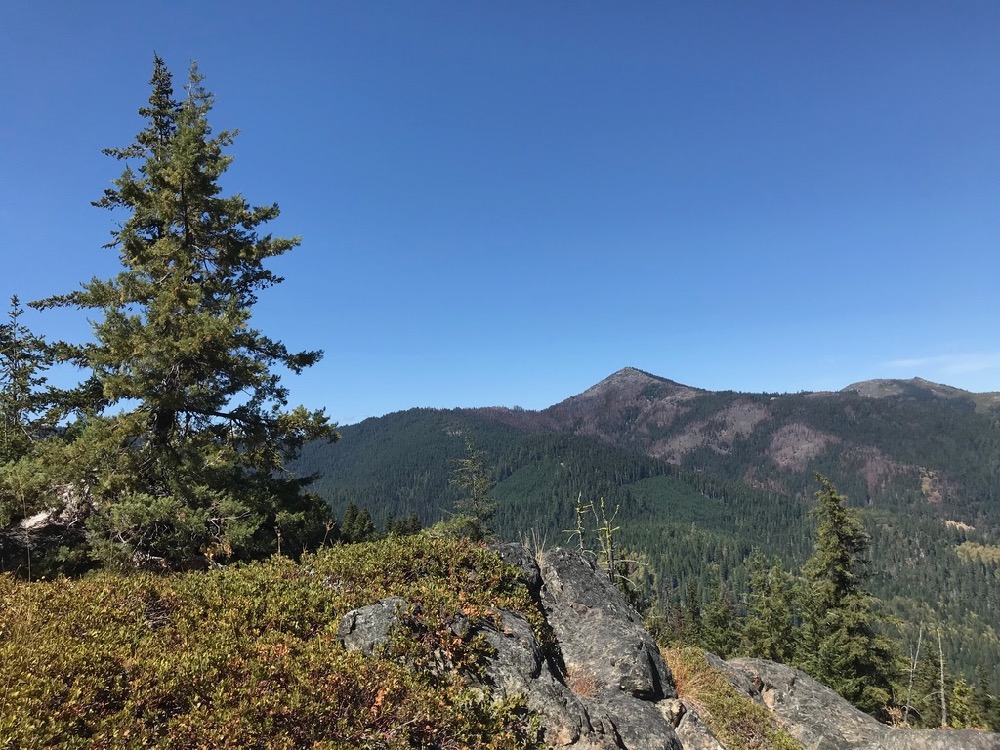 The Klamath-Siskiyou Mountains are renowned for their biodiversity. A whopping 35 species of conifer grow throughout the Klamath-Siskiyou Mountains, and 22 species of conifers can be found right here in the Applegate River watershed alone. Yet of all the conifer species in our region, Baker cypress (Hesperocyparis bakeri) is the most obscure, unknown, underappreciated and mysterious.

Worldwide, Baker cypress is found in only eleven widely dispersed and relatively small populations located in the northern Sierra Nevada Mountains, the southern Cascade Mountains and the Klamath-Siskiyou Mountains of southwestern Oregon and northwestern California. Of these populations, six grow on serpentine or granitic soils in the Klamath-Siskiyou Mountains and five grow on volcanic soils in the Sierra Nevada and southern Cascade Mountains. These populations range from an estimated 7,000 acres at Timbered Crater on the Lassen National Forest, to less than 3 acres on Flounce Rock above the Rogue River (Merriam.2010).

Baker cypress is a Pleistocene relic from a more moist climatic period when it was broadly distributed across a more contiguous range. Now restricted to highly infertile soils and particularly marginal sites, the species has evolved through speciation and long periods of time to fill a very narrow habitat niche. It is now the northernmost naturally occurring cypress tree in the world (Kaufmann. 2012). Overtime, its range has contracted, leaving only isolated populations scattered across the region in small pockets of habitat, with a very specific fire regime.

Baker cypress is a sun-loving tree that simply does not compete well with other, more vigorous conifer species. It appears that its adaptation to poor soils and high severity fire are related to its need for limited competition from other conifers or even hardwood trees.

The presence of high severity fire is not enough to maintain or increase Baker cypress populations on the landscape or stand level. Instead, fires must also be relatively infrequent. In fact, repeat high frequency fire in Baker cypress habitat can lead to population declines and immaturity risk.

Baker cypress has serotinous, resin-sealed cones that require fire to open and disperse the mature seed. Until the heat from a hot fire opens those cones and disperses Baker cypress seed, the entire stand’s seed load is stored in the canopy of existing trees. (Merriam. 2010). Once dispersed en mass following a wildfire, the viability of Baker cypress seed is relatively short lived. This means that they must germinate vigorous populations in the freshly burned soils or risk significant population declines or localized extirpation (Vogl etal. 1977, Merriam. 2010).

Baker cypress represents all that is still wild and unknown in the Siskiyou Mountains. It hides in isolated canyons and on specific mountaintops throughout the region, waiting for a high severity fire to rip through its habitat and trigger renewal. Like a phoenix rising from the ashes, Baker cypress is a symbol of strength, hope and resilience.

Like the mythical Bigfoot, many have heard of its existence, some have hunted it in its habitat, but few can claim to have had the pleasure of finding a grove of Baker cypress. Few have smelled the foliage of Baker cypress wafting through the breeze on a hot summer day, few have watched the first morning light illuminate its canopy, and few have swam in clear mountain streams surrounded by thickets of cypress trees. Here in the Siskiyou Mountains we can, and we encourage you to do so.

In the Applegate River watershed Baker cypress can be found in only one widely scattered population in upper Carberry Creek. Located in numerous small groves across Steve Peak Ridge, the population extends up the Sturgis Fork watershed from a saddle west of Iron Mountain to Steve Peak. Other populations can be found near Miller Lake and below Little Craggy Peak.

In total, it is estimated that the Sturgis Fork population covers less than 50 acres (Merriam. 2010) and is located entirely within the Kangaroo Inventoried Roadless Area. In some places, individual trees can be found growing in isolation and in other locations, small groves of Baker cypress can be found.

The largest grove is located east of Miller Lake in “Cypress Basin.” This stand is centered around a prominent rock outcrop at the headwaters of Miller Creek. Here, thickets of Baker cypress grow among patches of Brewer’s spruce, incense-cedar and true fir. Most of the Baker cypress grows from shallow soil in the little gullies that cut into this broad rocky outcrop.

Below the rock outcrop Baker cypress also grow among stands of relatively moist mixed conifer forest consisting of white fir, red fir and incense cedar. Large tree-form Baker cypress grow into impressive specimens in these stands, including the second largest Baker cypress in the world — a massive, open grown tree over 46″ in diameter.

The Cypress Basin stand was first “discovered” by the first Forest Service Ranger in the Applegate Watershed, Bill Fruit. Later, in the 1930s, Oliver Matthews, a self described “botanical tramp” and noted dendrologist began exploring the Miller Lake area and advocating for its protection. In particular, he was intrigued by the Baker cypress and the surrounding old-growth forests. This exceptional grove of Baker cypress is now protected in his honor, along with Miller Lake in the Oliver Matthews Research Natural Area.

Seiad Creek is a tributary of the Klamath River draining the rugged redrock canyons south of Red Butte and the Siskiyou Crest in the Kangaroo Inventoried Roadless Area. The area is just over the ridge from the Applegate watershed and can be accessed via Cook and Green Pass Road (Forest Service Road 1055) in the Upper Applegate. At 800 acres, the Seiad Baker Cypress Botanical Area contains the largest populations of Baker cypress in the Klamath-Siskiyou Mountains, and the third largest population in the world (Merriam. 2010).

The Seiad Creek population contains numerous even-aged stands regenerated from multiple regional wildfires, including the 1951 Devil Fire, 1987 Fort Complex Fire, 2013 Fort Goff Fire, and the 2017 Abney Fire. Each fire burned through portions of the population creating a mosaic of burned and unburned habitat. This mosaic of periodic high severity fire has established large, dense populations of Baker cypress and increased the abundance of Baker cypress on the landscape.

In fact, in the 1930s, when Oliver Matthews visited this stand he described a “few hundred” trees growing in the Seiad Creek canyon. Today, literally hundreds of thousands of trees can be found on the site and the population has dramatically expanded in response to the four major fires that have burned through this stand in recent years.

After these historic burns and the subsequent regrowth, the Seiad Creek population is thriving like few others. Baker cypress thickets dominate large portions of the West Fork Seiad Creek canyon, and dense populations of skinny little cypress trees have colonized both the 1951 Devil Fire and 1987 Fort Complex fire areas. Thousands and thousands of little seedlings have also sprung up following the 2013 and 2017 fires, creating new stands of vigorous young trees.

In recent years the mixed severity fire regime on Seiad Creek has sustained the health and vigor of Baker cypress habitat in the area. It has regenerated numerous even-aged cohorts and maintained the pattern of burning necessary for the species to thrive. Fire has also renewed three nearby populations on the Klamath River in or adjacent to the Marble Mountains Wilderness Area, at Timbered Crater on the Lassen National Forest, and in the two populations located in the northern Sierra Nevada Mountains near Mud Lake and on Wheeler Peak.

The cumulative effect of these wildfires has been highly restorative for existing Baker cypress populations, regenerating new stands, and creating new habitats.